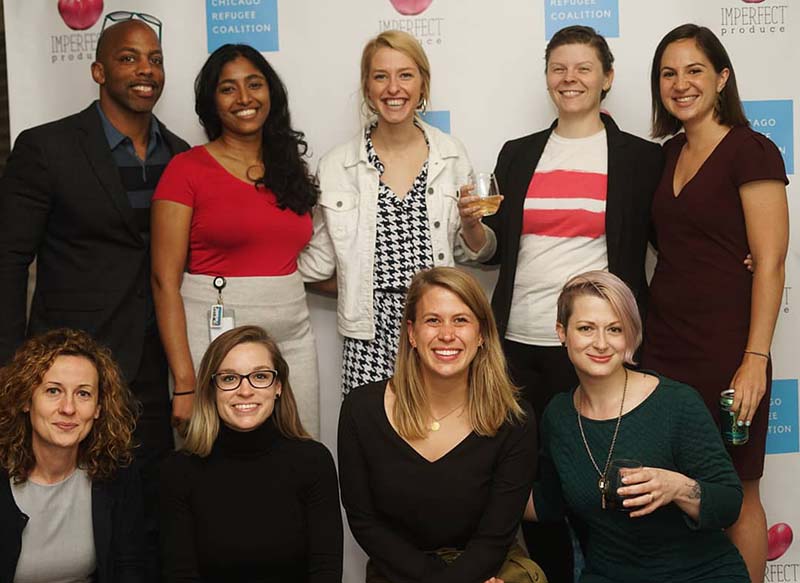 At Intouch, we have a few favorite philanthropic causes. Most often, we raise funds for organizations like the Ronald McDonald House, Children’s Mercy Hospital, Gilda’s Club and our local pet shelters, but this summer, Intouch’s Chicago philanthropy committee chose to support a new and equally important organization: the Chicago Refugee Coalition (CRC).

CRC is a year-old nonprofit serving the refugee community in and around Chicago. On its website, the CRC says that, currently, there are nearly 70 million refugees worldwide; in the Chicago area, the number is estimated to be more than 30,000. To differentiate refugees from other immigrants, CRC defines a refugee as someone “who has been forced to leave their country in order to escape war, persecution, or natural disaster.”

Services that CRC provides include assistance with housing, medical and legal issues, an annual coat drive, and a mental health fund for refugees coping with trauma. The organization also works with Imperfect Produce to provide a mobile food bank and has served more than 18,000 meals over the past year. CRC hopes to launch additional services soon, including financial literacy programming, citizenship seminars, promoting access to childcare, breaking down barriers to securing safe, affordable housing, and developing programming to foster economic opportunity for women.

Katie Sonnefeldt, a medical analyst in the Chicago office – who serves on the board of CRC and proposed a partnership with Intouch — helped plan a fundraising event last month in support of World Refugee Day, and several Intouchers attended.

Approximately 60-75 people were there, including members of the Chicago nonprofit community and representatives from local government. Connor Mautner, the founder and services director of CRC, spoke about the organization – its goals, its partnership with Imperfect Produce, recent initiatives, and future plans. An ESL teacher and a counselor from a local high school were also there and talked about the impact the food program has had on refugee families; you can check out a video of the students discussing it here. To deepen a connection with those in need, artist Pam Ingalls loaned several of her paintings of Chicago refugees.

On the whole, it was a great evening in support of a truly worthwhile cause. As the world grows more tumultuous and people are pushed to leave their home countries just to stay safe, welcoming them and helping them succeed in their adopted country is more important than ever.

Intouch is committed to being a diverse and inclusive place to work, where all are welcome and differences are valued. If you’re interested in joining a company that reveres each employee’s unique strengths and perspective, take a look at our jobs page!

Find out what made this group program director return to Intouch, six years after leaving.

We don’t see each other in person much these days, but when we do, it’s like we were never apart. Check out what happens when Intouchers get together.

A Conversation With an Intouch “Boomerang”

“Boomerangs” are employees who leave and then return to Intouch. Check out our Q&A with Michaela Bradshaw, an account director in Kansas City, to learn what made coming back to Intouch a no-brainer!