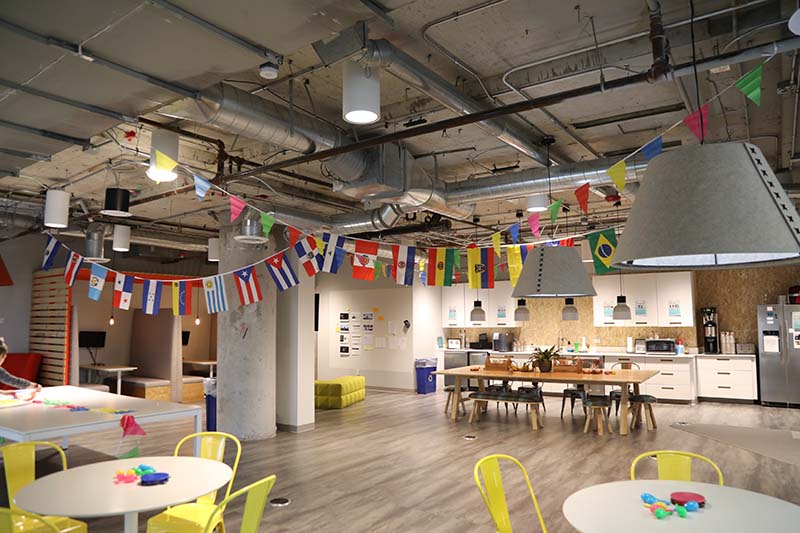 Each year since 1988, National Hispanic American Heritage Month is celebrated between September 15 and October 15. The month is meant to honor the generations of Hispanic Americans who have positively influenced and enriched the United States and its society. As part of Intouch’s commitment to ensuring an inclusive and diverse work culture, our New York, Chicago, Kansas City and Boston offices recently got in on the celebratory action with Hispanic-themed happy hours that featured food, drink, musical performances and educational posters featuring Spanish words with English translations.

The theme for our happy hours was “Lengua Brava” (pronounced lenhg-gwah brah-bah), or “brave tongue,” and was meant to capture the collective pride in Hispanic/Latinx identity and culture in the face of daily pressures to shrug off a rich heritage and assimilate into white American culture.

For our first-ever Hispanic Heritage Month celebration,” said Antonio Rivera, associate director of Intouch’s Inclusion and Diversity Alliance, “it was important that we celebrated the diversity within the Hispanic and Latinx community, since many times, they are seen as a homogenous group.

Why not begin the month on September 1? September 15 was chosen as the official start to the month because it’s the anniversary of independence for Costa Rica, El Salvador, Guatemala, Honduras and Nicaragua; Mexico and Chile’s independence days are September 16 and September18, respectively; and Columbus Day or Día de la Raza, is celebrated in mid-October. In the United States, Día de la Raza – which actually has many different names, depending on which Latin American country is celebrating — has served as a day of mobilization for Latino activists.

To learn more about National Hispanic American Heritage Month and contributions from the Hispanic/Latinx community, check out this very comprehensive site sponsored by the Library of Congress.

Also, if you’re interested in working in a diverse, inclusive environment, check out our jobs page

Yes, We’re Serious — At Intouch, You Decide Where You Work

New year, new you – want more flexibility in your 2022? Remote employees cite many benefits associated with a work-from-home approach. Read on to learn about Intouch’s flexible policy and what makes it so successful.

Intouch Says Farewell to Three “Long-Haulers” – But First, A Q&A!

Before we let them go, we sat down to talk about what makes Intouch so special. Read on to find out what’s changed and what has, thankfully, stayed the same!

“Boomerangs” are employees who leave and then return to Intouch. Check out our Q&A with this senior director of media operations and find out why she came back.